Colin Jones and a Day in Revolutionary France

How do you write the history of a single day?

It helps if that day is extraordinarily well-documented, as Professor Colin Jones noted. In his CCHS talk, Jones, professor of history at the University of Queen Mary in London, laid out his work in progress on writing “the history of a day that mattered”: 9 Thermidor Year II on the calendar of Revolutionary France, otherwise known as July 27, 1794. 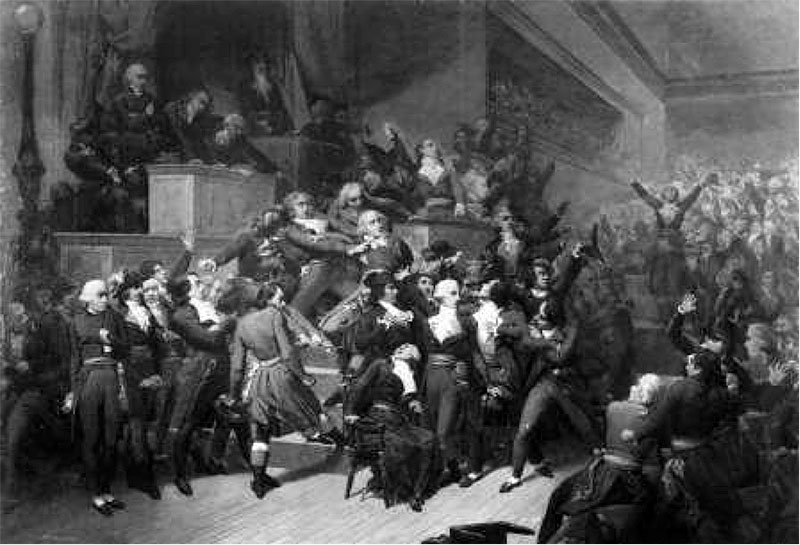 Jones suggested that 9 Thermidor could be called one of the most important days in the history of the French Revolution, yet, paradoxically, the day has received less scholarly attention than others. Jones explained that historians tend to focus either on the day before and the buildup to the events of 9 Thermidor, or the day after, and the aftermath of Robespierre’s fall.

For Jones, the traditional telling of the day’s events also raised questions. Per the standard narrative, on 8 Thermidor Robespierre went before the National Assembly, upset with how the government was being run and threatening reprisals against certain unnamed individuals, an act that Jones described as creating “a coalition of the frightened.” The next morning, on 9 Thermidor, Robespierre was arrested and imprisoned. During the afternoon word of the arrests spread through the city, and a great number of people and National Guardsmen mobilized in support for Robespierre on the Place de la Maison Commune. But – curiously – this popular support evaporated during the evening. Jones underlined this perceived apathy, and gave the traditional explanation that private life mattered more than public action for many Frenchmen and women. 9 Thermidor, then, was about the de-politicization of the Revolution.

Jones then described his own plan to study 9 Thermidor Year II by creating a detailed microhistory of the day itself, written hour by hour, from midnight to midnight. As Jones pointed out, this Rankean desire to “figure out what happened” is new to him, a historian who has written many famous cultural histories, including a history of the smile.

Drawing on the extensive documentation of the day, including police dossiers, Jones intends to recreate the day in as much detail as possible – to tell the history of 9 Thermidor from the ground up. Jones proposed that his research suggests that the “de-politicization” of the people is a fiction: that they did not go home, that they instead re-mobilized. Jones described his decision to draw not only from microhistory, but also from the “sociology of action” to understand how and why people in crowds made the decisions they did. And his focus on the day itself – hour by hour – means that Jones is bracketing large-scale questions, specifically avoiding any mention of origins, causes, consequences and fallout.

In short, one might say that 9 Thermidor was, in fact, a day that mattered – but that our traditional explanation of why it mattered might need reconsideration. Colin Jones’s research aims to provide that correction, and his CCHS talk outlined how that research will reshape our understanding of the French Revolution.