Mary Kelley and a Collaborative History of the Book

Mary Kelley and a Collaborative History of the Book
Laura McCoy | February 25, 2015

What, exactly, constitutes the history of the book? In a talk co-hosted by the Nicholas D. Chabraja Center for Historical Studies and the Northwestern University Library, Mary Kelley (Ruth Bordin Collegiate Professor at the University of Michigan) urged her audience to think outside of the box—or, in this case, the book. In her talk, “‘Talents Committed to Your Care’: Reading and Writing Antislavery in Antebellum America,” Kelley urged the audience to consider magazines, ephemera, and even oral performance in their histories of the book. Most forcefully, Kelley argued that we must move beyond an understanding of reading and writing as silent and solitary processes to see them more fully as collaborative and conversational ventures.

To illustrate this point, Kelley turned to African-American women’s antebellum literary societies like the Female Literary Association of Philadelphia, formed in 1831. Dedicated to both social and self-improvement, these voluntary societies became sites at which individual identities and cultural communities could be simultaneously forged. Authorship within these associational networks and mutual aid societies was a social enterprise—a collaborative project often obscured by modern scholars jumping to attribute authorship to an individual.
Kelley’s most striking example of this was her revelation that “An Appeal to the Women of the Nominally Free States” (published by an Anti-Slavery Convention of American Women in 1837) has been misattributed to Angelina Grimké alone. In fact, Kelley argued, several women collaboratively wrote the text and mutually agreed that it should be published anonymously. Even more, the only name to appear on the tract’s title page was that of Sarah Forten, an African-American Philadelphian writer. Forten’s name appeared as the author of a poem reproduced in part on the title page. Forten’s poem, “An Appeal to Women,” included the lines “Our skins may differ, but from thee we claim / A sister’s privilege, and a sister’s name.” Only in the hands of historians, Kelley pointed out, did the tract mistakenly become the work of a single author, and Forten’s poetic appeal to interracial sisterhood become obscured.

Building on the idea of writing and literacy as a collaborative project, Kelley noted that before their writing made it to the pages of The Liberator, African-American women of the Female Literary Association shared and polished their poems and prose with colleagues. This collaborative process prepared the women for the more individualistic nature of the world of print, even if they entered that world pseudonymously. 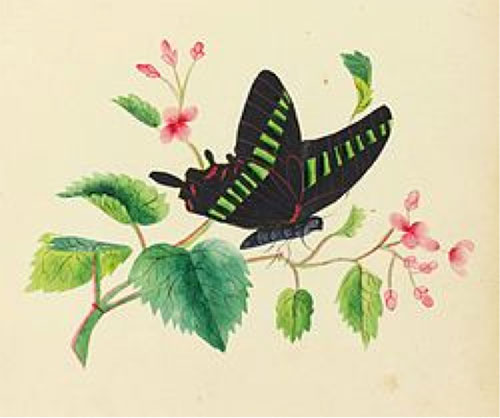 A watercolor by Sarah Mapps Douglass

This kind of literary collaboration existed at the crossroads of personal and activist networks, as Kelley’s elegant use of visual culture allowed her to vibrantly illustrate. Kelley perused the contents of these literary women’s friendship albums—or bound volumes of prose, poetry, paintings, and other media produced by friends and lovingly curated by both women and girls. These albums were declamations of friendship, sentimental collaborations that allowed women to cement emotional bonds through visual and textual production. Even more, for the African-American women on whom Kelley concentrated her talk, the album project was about more than just feminine keepsakes; it was also distinctly political. Not only did an intricate and graceful painting of a butterfly by Sarah Mapps Douglass in Amy Matilda Cassey’s album demonstrate what Kelley termed the “optics of respectability,” Douglass’s color choices (she rendered the butterfly solely in dark hues) allowed her to make a statement about race, beauty, and value, thereby marking the album itself as a vehicle of anti-racist sentiment.
Appropriately, Kelley bookended her talk with reminders of literary and historical synergy. She began by recognizing the work of librarian and curator Dorothy Porter Wesley at Howard University’s Moorland-Spingarn Research Center, and ended on conversations with the audience ranging from literary naturalism to commonplace books to nineteenth-century Fourth of July orations by African Americans. Altogether, the event underscored Kelley’s point that the history of the book is a collaborative curatorial project, today as it was in the past.