Frederick Hoxie and the Historical Fit of American Indians

Hoxie, the Swanlund Professor of American Indian Studies at the University of Illinois at Urbana-Champaign, pointed out that the narrative of U.S. history has long been shaped by tales of white “discovery” and “conquest” of native lands. But what happens, Hoxie asked, when historical narratives are interrupted, altered, and overturned by previously unheard actors?

In his CCHS talk, Hoxie gave an overview of the sweeping changes to scholarship on Native Americans that have occurred over the last few decades. The “New Indian History,” he explained, has aimed to rewrite the standard narrative of American history and move away from an antithetical relationship between “civilization” and “savagery,” a relationship defined, in Hoxie’s words, by “a chasm separating Indian people from white people.”
Revisionist historians have instead emphasized the agency of native peoples, pointing to the persistence of native identities in the face of external pressures. This approach can be seen in Hoxie’s most recent book, This Indian Country: American Indian Activists and the Place They Made (Penguin, 2012), which is composed of short biographies of Indians most Americans have never heard of and describes the complexity of their lives in great detail. Among the book's protagonists is Sarah Winnemucca, a Paiute woman who was both as an activist and an author – her 1883 Life Among the Paiutes offered a strong critique of U.S. government policy toward Native Americans in the West. 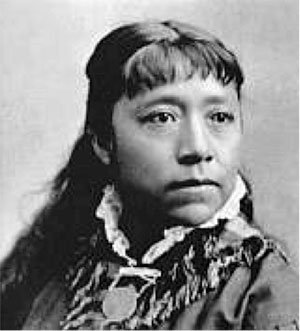 Hoxie then described the future of American Indian Studies, or what he termed “the new New Indian History.” Pointing to the research of his current graduate students at Illinois, Hoxie declared that current and future research will do much more than contest narratives of “civilization and savagery.” Instead, studies will address transnational and postcolonial questions, questions about gender and identity, and – as one example – they might focus more on claims to indigenous nationhood, rather than revising any narrative based solely on the United States.

After mentioning his role serving on Northwestern’s John Evans Study Committee, Hoxie took questions from the audience and continued to underline how dynamic the field of American Indian history is, and how dynamic he hopes it will be going forward.

“Clearly,” as Hoxie concluded, “there is a great deal more new Indian history to come.”